Article 13 of Constitution of India 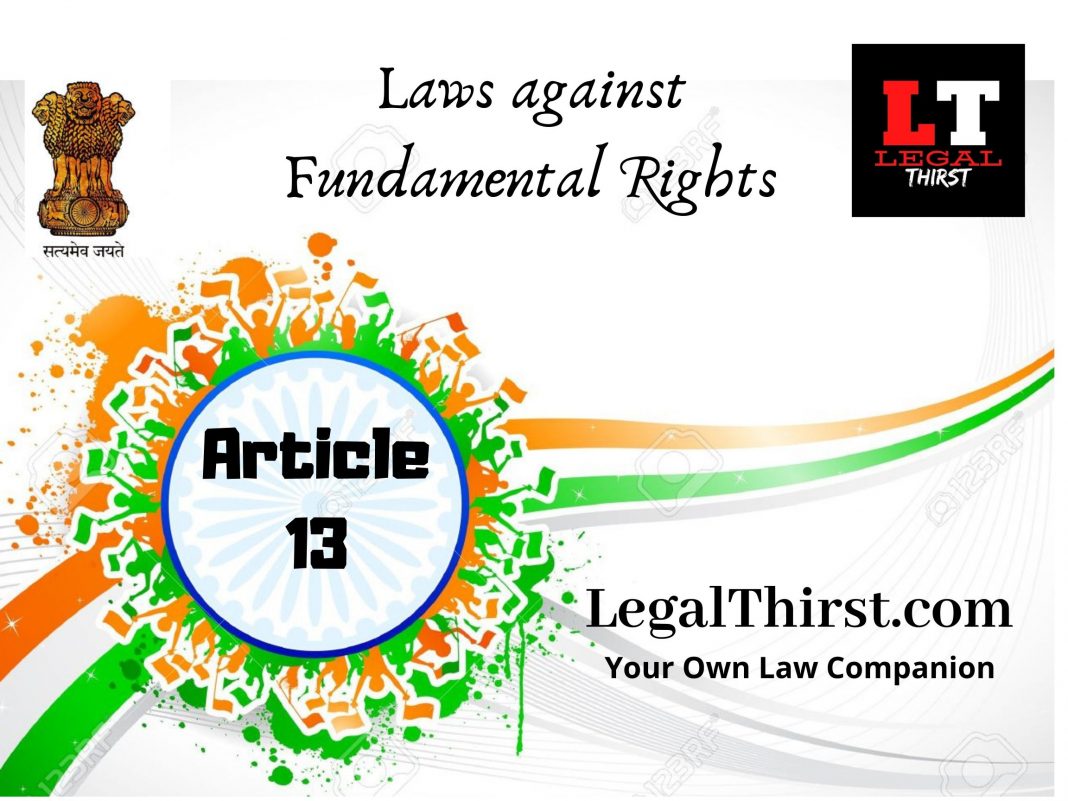 Laws inconsistent with or in derogation of the fundamental rights
1. All laws in force in the territory of India immediately before the commencement of this Constitution, in so far as they are inconsistent with the provisions of this Part, shall, to the extent of such inconsistency, be void
2. The State shall not make any law which takes away or abridges the rights conferred by this Part and any law made in contravention of this clause shall, to the extent of the contravention, be void
3. In this article, unless the context otherwise requires
a. “Law” includes any Ordinance, order, bye-law, rule, regulation, notification, custom or usages having in the territory of India the force of law;
b. “Laws in Force” includes laws passed or made by Legislature or other competent authority in the territory of India before the commencement of this Constitution and not previously repealed, notwithstanding that any such law or any part thereof may not be then in operation either at all or in particular areas
4. Nothing in this article shall apply to any amendment of this Constitution made under Article 368 Right of Equality

That laws before this date (26.01.1950) which violates fundamental rights as mentioned under Chapter III of the Constitution (Art. 12-35) will automatically become invalid after 26 Jan 1950.

Let’s discuss both of them one by one.

Case Law: – Bhikaji Vs. State of M.P.
In this case, the Berar Motor Vehicle Act,1947 was in question. It empowers the state government to take control of the entire motor transport vehicle business. This violates the fundamental right to do any occupation under Article 19 of the constitution. Under 19(6) of the constitution allows the government to have certain business manipulation. So, the supreme court held that any existing law inconsistent with fundamental rights becomes inoperative from the date of the constitution. It will not be totally dead but goes dormant.

The state can’t make any such laws which violate fundamental rights provided to Indian citizen under the constitution.

Can a company also fight to obtain their fundamental rights?

Case Law: – State of Gujarat Vs. Ambika Mills
For, the question raised here, the fundamental rights are for citizens, not for companies or enterprises. So, such acts will still be valid for Non-citizens & Companies.

Article 13 clause 3, defines the term, ‘Law’ that is used under this Article. That what exactly we mean by the term law.
Law is meant by any Ordinance, Bye-Law, Regulation, Notification or Custom- Usage, Order.
Another term is “Laws in Force”, this includes laws passed or made by Legislature i.e. Indian Parliament or State Assembly.
It includes the ‘other competent authority’, which is meant by the governmental authority. Also, all those laws which are not yet repealed and are in force after the constitution gets in force on date 26 Jan 1950.

In both of these cases the Supreme Court distinct between the Ordinary Law & Constitutional Law. By this, it was questioned whether the constitutional law is not under the definition of term Law or not? The court says that amendments under Article 368 which explain the procedure of amendments, can’t be challenged under Article 13(2).
But in 1967, the famous case of Golakhnath vs. the State of Punjab. The court changed its verdict and says that constitutional amendment also if they are against fundamental rights can be bought for judicial review.
But here comes a Game Changer! ‘The Parliament’

In 1971, the 24th Amendment inserted clause 13(4) that nothing in this article shall apply to any amendments of this constitutional made under Article 368.

Case: – Keshav Ananda Bharti Vs. The state of Kerala, 1973
In this landmark judgement, the 13 judges’ bench of Apex court upheld the validity of the amendment in the constitution. But maintained that the basic features of the constitution can’t be amended.
This case gave the theory of ‘Basic Structure’.

In Minerva Mills Vs. The Union of India, 1980. The court defined the theory of Basic Structure in more detail and we got a more clear view of this. We will know this latter.

In 1989, Chief Justice of India, Shri R.S. Pathak in case of Raghuvir Singh Vs. The Union of India. That the court can examine the validity of even an amendment of the constitution.
So, there is a very great role of Interpretation in Article 13 because Article 13(4); becomes almost ineffective after S.C. judgements.