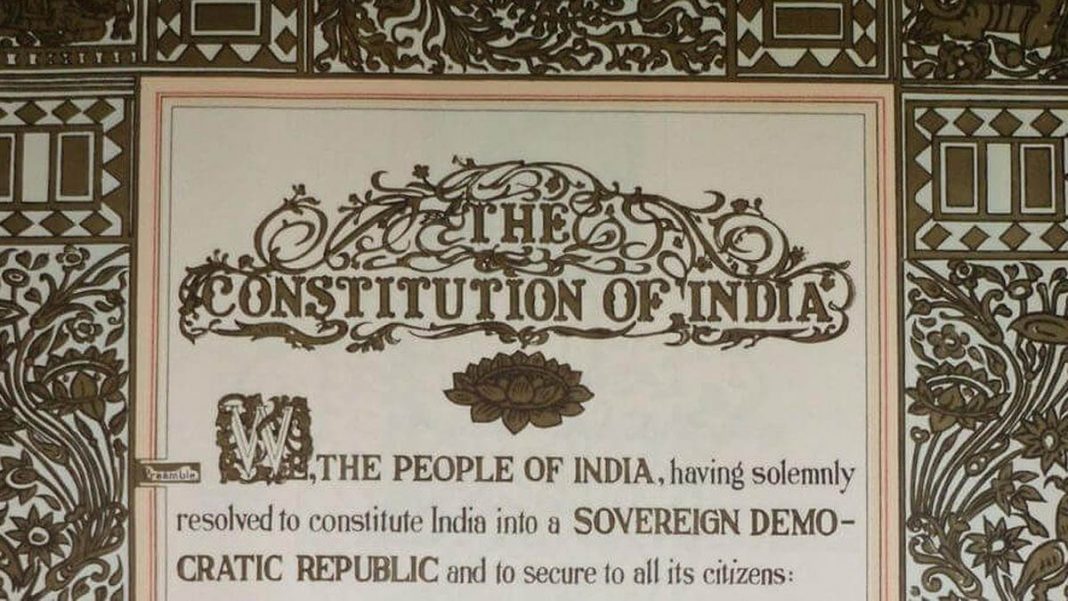 Word to word description of Preamble and its importance that describes the basic structure of the Indian Constitution.

WE, THE PEOPLE OF INDIA, having solemnly resolved to constitute India into a SOVEREIGN SOCIALIST SECULAR DEMOCRATIC REPUBLIC and to secure to all its citizens:

EQUALITY of status and of opportunity; and to promote among them all

FRATERNITY assuring the dignity of the individual and the unity and integrity of the Nation;

IN OUR CONSTITUENT ASSEMBLY this twenty-sixth day of November 1949, do HEREBY ADOPT, ENACT AND GIVE TO OURSELVES THIS CONSTITUTION.

1. WE, THE PEOPLE OF INDIA:- That we have only one identity i.e. Indian, respective of caste, sex, religion, status, etc.

2. SOVEREIGN:– internally and externally we have to remain sovereign. No external power can rule us and internally elected legislature can represent the people of India.

3. SOCIALIST:- This word initially was not the part of the preamble of the constitution of 1950, but inserted through 42nd amendment to the Indian Constitution by former prime minister Indira Gandhi in 1976; before Pandit Nehru opposed this word to avoid socialist controversy.

4. SECULAR:– Through 42nd amendment in 1976 to bring unity in Hindu and Muslim. The Indian Constitution is the example of the positive concept of secularism in the world i.e., all religions in our country (irrespective of their strength) have the same status and support from the state. Also, Article 25 to 28 of the Indian Constitution provides the Right to all citizens to follow the religion of their choice and to have faith in any.

6. REPUBLIC:- The word Republic in Preamble, states that a non- monarchical government; Republican form of Government & also the dissolution of constitutional monarchies by the reorganization of States on linguistic basis and princely state cannot rule anymore. In a monarchy, the head of the state (usually king or queen) enjoys a hereditary position, by the process of succession, eg, Britain.  On the other hand, in a republic government, the head of the state is always elected directly or indirectly for a fixed period, eg, USA, India.

7. JUSTICE:- Check of the judiciary over the legislature and the social, economic, political, judiciary. Article 39 of the Constitution also says about the fair distribution of wealth among citizens.

8. LIBERTY of thought, the expression:- given by part III of the Constitution – Fundamental Rights.

Article 19:- Freedom of Speech and Expression

Article 24:- Protection of Children in factories

9. EQUALITY of status and of opportunity:- Shri Nagappa and Gandhian principles to raise Scheduled caste and Scheduled Tribes i.e. Harijans. These expectations got succeed when Shri K.R. Narayanan (IFS diplomat and from Scheduled Caste) become President of India.

10. Unity and Integrity of the Nation:- This phrase, Unity, and integrity are inserted by the 42nd amendment by former Prime Minister, Indira Gandhi in 1976 in the preamble of the constitution. In view of internal disturbances and sectarian interests within India, when mass-sterilization programs by her govt. got prevalent.

11. FRATERNITY:- Fraternity is meant by a sense of brotherhood. The constitution promotes this feeling of fraternity by the system of single citizenship to all. India doesn’t have different citizenship that is one for state and other for Nation. Also, the Fundamental Duties under Article 51-A that is also added by 42nd Amendment by Indira Gandhi Government in 1976 says that is shall be the duty of every citizen of India to promote harmony and the spirit of common brotherhood amongst all the people of India transcending religious, linguistic, regional or sectional diversities.

The Preamble declares that fraternity has to assure two things the dignity of the individual and the unity and integrity of the nation. The word ‘integrity’ has been added to the preamble by the 42nd Constitutional Amendment (1976).

Significance of the preamble:

The preamble embodies the basic structure and fundamental values like political, moral and religious- on which the constitution is based. It contains the grand and noble vision of the constituent assembly and reflects the dreams and aspirations of the founding fathers of the constitution.