Article 12 of Constitution: Definition of State 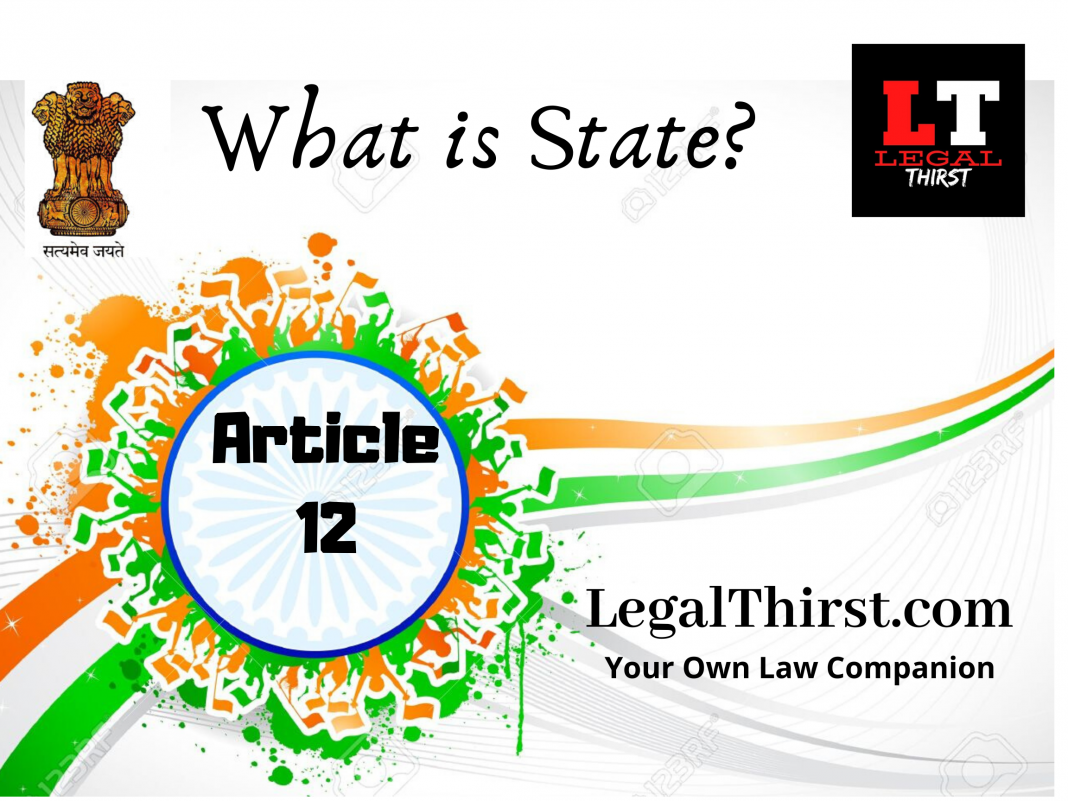 The first two classifications created no confusion in minds about government bodies at the center and state level.

Section 3 (31) of the General Clauses Act defines local governmental bodies as Local self-government, Municipality, Panchayat.
Its subsection (31) “local authority” shall mean a municipal committee, district board, body of port commissioners or other authority legally entitled to, or entrusted by the government with the control or management of a municipal or local fund;
The fourth classification, Other dynamic Authorities includes Electricity board, judiciary, etc.

Let’s understand it with some case examples:-

The #University of Madras Vs. Shantabai.
The madras university is established by – the Madras University Act. Here, in this case, the question arises that whether Madras University (MU) is a State or not?
To solve the above problem court applied the Legal Maxim, i.e. Ejusdem Generis which means, ‘of same kind’. This Maxim explained the fourth classification for the word, ‘Other Authority’. By applying this test, the other three governmental categories don’t make fall the university of state in the definition of the state.

But this classification using the Legal Maxim,- ‘Ejusdem Generis’ gets canceled. In the Case of #Smt. Ujjambai Vs. State of Uttar Pradesh AIR 1962 SC 1621. As this approach is so limited and restricted and also the other three government bodies don’t fall in the same category either. They also don’t have the same color and nature. So, we can’t use this approach while deciding to include the other authorities under the definition under Article 12.

In #Rajasthan Electricity Board Vs. Mohan Lal AIR 1967 SC 1857. The Supreme court stated that – the body created as per any law or under the constitution to be included in the definition of State. This body may not consist of Government and Sovereign functions. Because that body will have so many powers to effect governmental functions & also fundamental rights of the citizens. So, “Universities will be State”.

In one other case of #Sukhdev Vs. Bhagatram AIR 1975 SC 1331, the question arises that whether the commercial bodies can be included under state definition or not. The commercial bodies like ONGC | LIC | IFC after this case are also ‘State’. They are also set up under special statutes.

In R.D. Shetty Vs. International Airport Authority AIR 1979 SC 1628, Mr. R.D Shetty was disallowed due to discriminatory reasons of caste to apply for the tender application of Indian Airport Authority (I.A.A.). In the same, the supreme court notices that I.A.A. is established under the Airport Authority Act (A.A.A.), 1971. The central government has vested with numerous powers while setting up of I.A.A. The management of Authority including the important positions of Chairman & Other governing body members. Also, the government has invested a huge amount of funds and capital in establishing I.A.A.
To resolve further confusion related to the definition of state, the supreme court gave.

That if:-
– The centre has a certain degree of control.
– Extra- Ordinary Financial Assistance by the government.
– Then that body will be an Instrument of state
– or Agency of state.

Som Prakash Vs. Union of India AIR 1981 SC 212
In this case, Bharat Petroleum is incorporated under the Companies Act. And the supreme court determined 5 criteria for state definition.

Judiciary Is State or Not?

H.M.Seervai, V.N.Shukla considers the judiciary as State. Their viewpoint is supported by Articles 145 and 146 of the Constitution of India.

In Prem Garg v/s Excise Commissioner Himachal Pradesh, & also in A.R. Antulay v/s R.S.Nayak and N.S.Mirajkar v/s State of Maharashtra. The Supreme Court held that when the decision making power of the judiciary is concerned, it is State. In the later, it was observed that while exercising its judicial decisions, it’s not a state.
In Rati Lal v/s State of Bombay, it was held that the ‘judiciary’ is not State for the meaning of Article12.

The word ‘State’ under Article 12 of the constitution has been interpreted by the courts and developed over time. It has a broad meaning that ensures that Part-III can be applied to a great extent. We can hope that it would continue developing with time.