IInternet is an advanced mechanism that has changed everyone’s life. But it is also the truth that the same mechanism is used for propagating many violent approaches. Still, the action lacks against such offenses because as stated above, “the internet is an advanced mechanism”, thus the need to advance the laws regulating internet/social media is quite necessary and inevitable.

The Internet has, incontestably, made the generation of the modern era absolutely dependent on its sources, information, connectivity, and communications and etc. which if seized to operate, then surely it will create havoc among the people as almost every commercial and business organization indulged in performing different tasks or roles depends upon the internet facilities. Thus, it is an unavoidable fact that unplugging the internet facilities will result in colossal monetary losses, civil unrest, and public retaliation against such actions of the government.

This disquisition will reflect the impact of internet shutdowns on the Indian economy as well as on businesses that completely to the hilt depend upon on the internet facilities for the survival and functioning of their businesses. Also, it will cynosure the need to amend or advance the laws regulating, specifically social networking platforms, internet operations.

Internet shutdowns are an absolute restriction imposed on the usage of internet facilities or services due to an order issued by an administrating body or the government. It may be limited to a specific place or to a specific date, days, and time. Also, there are two types of approaches made by the governmental bodies to block the internet services on different platforms as it may be limited to the mobile data connection which functions through the telecommunication service providers such as Vodafone, Idea, Airtel, etc. or it may be limited to the internet broadband services which is generally used to connect a desktop or it may restrict both at the same time.

The largest democracy of the world was also responsible for the largest number of internet shutdown in the year 2018. According to the #keepItOn coalition, India was responsible for 67% (134) of global internet shutdowns. Now it can be asserted that how the institutional framework manipulates the fundamental rights by simply justifying it as a tool used for the sake of public and law order. Because it is an evident fact which can be traced down as incidents like riots, mass protest or violent mob have occurred many times long before these digital innovations were invented, then what change this undemocratic step of the government of unplugging the internet services will bring in the society. A government of a democratic nation must understand and praise the fundamental principles cited in the constitution rather than taking despotic decisions.

Last year, the government of India imposed internet shutdown for about 106 times from which the longest was the one imposed in the Kashmir region due to the abrogation of Article 370 from the Indian Constitution. For 213 days from 4th Aug. 2019 to 4th Mar. 2020, the internet services along with the landline services were blocked, although the services were lifted in between But the only 2G connection was permitted that to even for a shorter period of time. Along with Jammu and Kashmir, most of the internet shutdown occurred in Maharashtra, Uttar Pradesh, and Rajasthan. 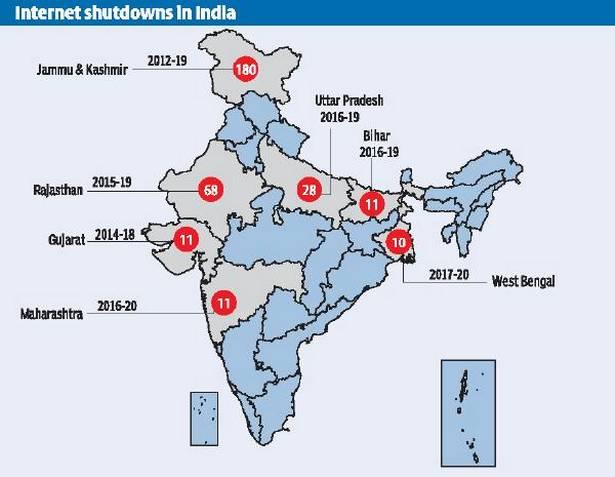 From the image above, it can be understood that the laws regulating the social networking platforms are incapable of curbing propagation of fake information due to which the government has to impose either restrictions or an absolute shutdown of internet services in a particular region or locality and the common people, as well as their day to day business affairs, gets affected unnecessarily.

The democracy of a country is judged by the level of freedom of its citizens to exercise or enforce their rights that are guaranteed to them and which is to be protected by the apex authority. But the Government of India, since 2014 to present, for more than 350 times have blocked the internet services. In 2018, the number of shutdowns in India was nearly 70% of the world’s internet shutdowns according to BBC news. The biggest source of information and communication being cut off is not an appropriate solution to curb any inciting activities posted or uploaded on the internet.

Moreover, the decision of shutting down the internet services is in itself an oppressing act as it clearly violates the fundamental rights of a citizen. Internet being the biggest medium of communication and expression in today’s world, can disrupt the normal lives of the citizens if it gets blocked or restricted because unplugging the internet services do snatches the basic rights and freedoms guaranteed in the constitution.

Some of such fundamental rights are;

These are the basic fundamental principles of the constitution that cannot be compromised in a democratic nation like India.

Furthermore, an economy or country which seeks to achieve a “5 trillion Dollar economy” and launches a “Digital India Mission” can’t rely on these solutions because of few people or group, the entire population gets effected unnecessarily and it also does creates obstacles for the businesses and economic growth. According to the report of the Indian Council for Research on International Economic Relations (ICRIER) in 2018, India lost over $3 billion in the period of 2012-2017 due to internet shutdowns. The biggest impact of this action was felt by the e-commerce market as these companies in its entirety depend upon internet connectivity.

One of the biggest reason for the losses that India sustained is Digital India Mission launched in 2015, which assisted in connecting the remote areas with e-commerce and services as India becomes the country with around 8.4 million internet users and many e-commerce organizations were now able to reach out the people living in such remote areas of the country. In 2019 alone, a report estimates that the impact on the Indian economy may be higher than $1.3 billion because of internet shutdowns lasting more than 4,196 hours in many regions of the country.

As the disquisition focuses upon the issues faced by the society and economy, one major finding is that internet shutdowns have contributed in an economic slowdown, violation of fundamental rights of the people and the mechanism opted by the government to curb provoking or instigating posts on the internet by shutting it down is superfluous. Thus, instead of shutting down the whole internet operation, it would be much better to regulate it properly. Hence, a serious step towards making of strict governing and more monitoring laws regarding social media should be taken by the government rather than shutting down the internet services and justifying it as a necessity for law and public order stability, because such decision has shown that it will only lead to the economic slowdown, business slump period market crisis and violation of fundamental rights.

This Article is Written by Sahil Mishra, Legal Researcher and Content Writer at LegalThirst.com. He is 2nd year Law Student at Llyod Law College, India.