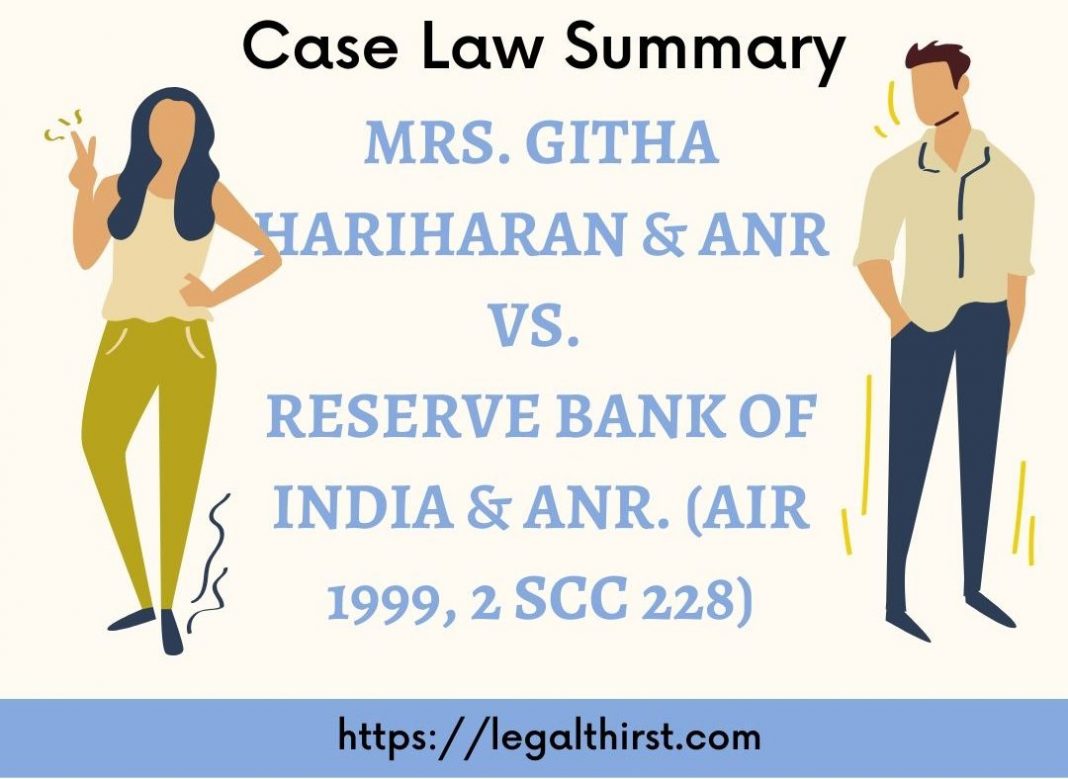 Facts of the Case:

The petitioner and Dr. Mohan Ram were married at Bangalore in 1982 and in July 1984, a son named Rishab Bailey was born to them. In December 1984 the petitioner applied to the Reserve Bank of India for 9% Relief Bond to be held in the name of their minor son Rishab along with an intimation that the petitioner No. 1 being the mother, would act as the natural guardian for the purpose of investments. The application, however, was sent back to the petitioner by the RBI Authority advising her to produce the application signed by the father and in the alternative, the bank informed that a certificate of guardianship forms a competent Authority in her favor.

Further factual score it appears that the first respondent has been repeatedly writing to the petitioner, asserting that he was the only natural guardian of the minor and no decision should be taken without his permission. Incidentally, the minor has been staying with the mother. The father has shown total apathy towards the child and as a matter of fact, is not interested in welfare and benefit of the child excepting however claiming the right to be the natural guardian without however discharging any corresponding obligation.

It is on these facts that the petitioner moved this honorable court under Article 32 of the constitution praying for the declaration of Section 6(a) natural guardian of a Hindu minor read with Section 19(b) guardian not be appointed by the court in certain cases, under the light of Article 14 and 15 of the constitution of India as unconstitutional.

The communication from the RBI is arbitrary and was opposed to the basic concept of justice under Article 32 of the constitution. Therefore challenging the validity of Section 6 of Hindu Minority and Wards Act, 1956. Further, they argued that the provision seriously disadvantages women and discriminate against women in the matter of guardianship rights, responsibilities, and authority in relation to their own children.

On observing the facts and arguments the bench asserted the predominance of the child’s welfare in all consideration. The welfare of the child is the most important over all the other, welfare not means only the monetary benefits, it includes love, affection, security, etc for the child. The bench pointed out the precedent Gajre vs. Pathnkhan. In which the father was alive, he was not taking any interest in the affairs of the child. In this case, the mother was ruled to be the natural guardian of her minor daughter. He set out that the Hindu law and the Act held that the father is the natural guardian and after him the mother but in the above cases, the court held the opposite.

In Jijabai Vithalrao Gajre Vs Pathankhan & Ors …….…a rigid insistence of strict statutory interpretation may not be conducive for the growth of the child, and welfare being the predominant criteria, it would be a planning exercise of the judicial power of interpreting the law so as to be otherwise conducive to a fuller and better development and growth of the child.

It was felt strongly that a long-established law should not easily be set aside; that a key point was an interpretation of the word “after” (Section 6 of Hindu Minority and Wards Act, 1956); and that,

The bench concluded that the literal meaning of the word [after] should not be taken, instead, it has to be interpreted to the object of the Act and the constitutional guarantee of gender equality since any other interpretation would render the statute void which ought to be avoided. Subsequently, the bench dismissed the petition with the direction to the Reserve Bank of India to formulate appropriate methodology in the light of his observations. The bench also instructed the District Court to take account of the comment when deciding the custody of the minor. (Source)

From the facts, issues, and the decision of the apex court we learn that fighting for our rights is a vital part in our life. The power judicial review vested in the hand of the judiciary must be used properly without making any over-rule. Simply declaring any provision of an Act as unconstitutional or void is not the right way of judicial review, finding out the purpose of the provision under consideration is a vital part while deciding the constitutionality of any Act. From the decision of the above case, the judiciary plays its role in a proper and perfect manner.

Article 12 of Constitution: Definition of State (Opens in a new browser tab)