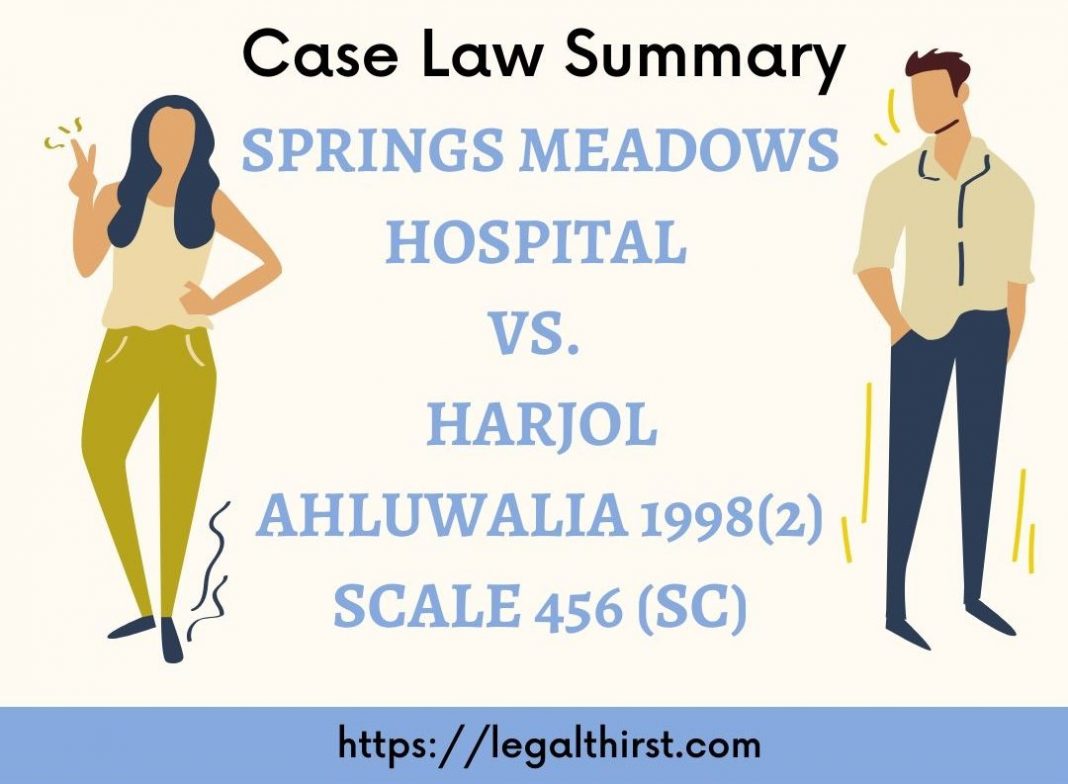 At, Supreme Court of India

A Complaint Petition was filed by minor Harjot Ahluwalia through his parents Mrs. Harpreet Ahluwalia and Mr. Kamaljit Singh Ahluwalia before the Commission stating that the minor was being treated at a Nursing Home in Noida. As there was no improvement in his health minor was brought to M/s. Spring Meadows Hospital which is the appellant in the later challenging case.

In the hospital, the patient was examined by the Senior Consultant Paediatrician, dr. Promila Bhutani and on her advice the patient was admitted as an in-patient in the hospital. The doctor made the diagnosis that the patient was suffering from typhoid; and intimated the parents that medicines have been prescribed for the treatment of typhoid fever.

it was further alleged that before giving the injection the nurse had not made any sensitive test to find out; whether there would be any adverse reaction on the patient. Seeing the minor child collapse the parents immediately called for help and the Resident Doctor Dr. Dhananjay attended the patient. Said Dr. Dhananjay told the parents that the child had suffered a cardiac arrest; and then by manually pumping the chest, the Doctor attempted to revive the heartbeat. The hospital authorities then summoned an Anaesthetist, Dr. Anil Mehta who arrived within half an hour; and then started a procedure of manual respiration by applying the oxygen cylinder and manual Respirator.

In the meantime, Dr. Promila Bhutani also reached the hospital and the minor child was kept on a device called manual Respirator. Though there was no improvement in the condition of the child. In the course of treatment as the minor’s platelet count fell; a blood transfusion was given but still, no improvement could be seen. Dr. Mehta; therefore, intimated the parents that the hospital does not have the necessary facilities to manage the minor child; and he should be shifted to an intensive Care Unit equipped with an Auto Respirator.

On the advice of Dr. Mehta, the parents admitted the child in the Paediatric Intensive Care Unit of the All India Institute of Medical Science. In the Institute the doctors examined the minor child thoroughly; and informed the parents that the child is critical; and even if he would survive; he would live only in a vegetative state as irreparable damage had been caused to his brain; and there was no chance of revival of the damaged parts. The minor was then thereafter discharged after informing the parents; that no useful purpose would be served by keeping the minor child there.

Dr. Anil Mehta as well as Dr. Naresh Juneja, Chief Administrator of Spring Meadows Hospital, however, offered to admit the minor child at their hospital; and to do whatever was possible to stabilize the condition of the child and accordingly the minor child was again admitted to the hospital.

On account of negligence and deficiency on the part of the hospital authorities suffered irreparable damages and could survive only as a mere vegetative and accordingly claimed compensation to the tune of Rs. 28 lakh.

The United Nations had passed a resolution in April 1985 indicating certain guidelines; under which the Government could make law for better protection of the interest of the consumers. Such laws were necessary more in the developing countries to protect the consumers from hazards to their health; and safety and make them available speedier and cheaper redress.

Gross medical mistakes will always result in a finding of negligence. The use of wrong drugs or wrong gas during the course of anesthetic will frequently lead to the imposition of liability; and in some situations, even the principle of Res ipsa loquitur can be applied.

The definition clause is wide enough to include not only the person who hires the services; but also the beneficiary of such services which beneficiary is other than the person who hires the services; the conclusion is irresistible that both the parents of the child as well as the child would be a consumer within the meaning of Section 2(1)(d)(ii) of the Act.

The National Consumer Disputes Redressal Commission held that since the resident doctor and nurse were employees of the appellant hospital; the latter was Liable and awarded compensation of Rs. 12.51 Lakh to the child and of Rs.5 lakh to the parents for acute mental agony.
Hon’ble Supreme Court dismissed the appeal with costs of Rs. 5,000.

This case summary is written by Mayank Malhotra, Campus Ambassador at Legal Thirst. He is a 1st year B.B.A. L.L.B. (Hons.) student at Christ (Deemed to be University) Delhi-NCR.