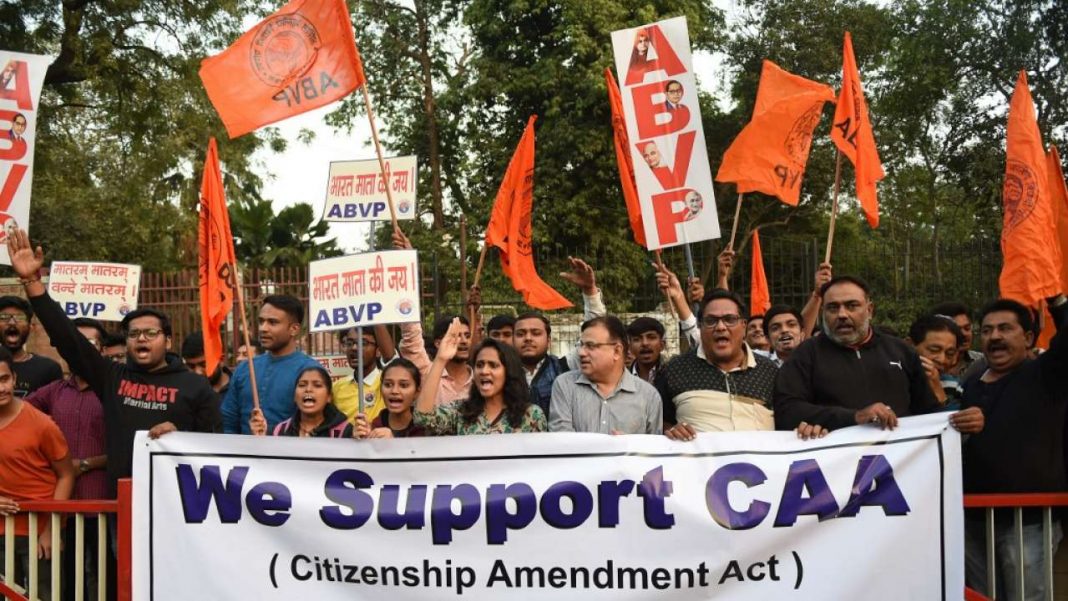 Citizenship (Amendment) Act (CAA) and also the National Register of Citizens (NRC), saying they’re two different things. The CAA has triggered many protests across the country. These protests should be seen through two distinct lenses.

This Article on Citizenship (Amendment) Act; CAA is written by Ishani. A student of 2nd year in B.A.L.L.B., of Law Dept. Maharishi Dayanand University, Rohtak. These are her personal views, on the topic that is nothing to do with Legal Thirst.

We all saw in several news channels that a lot of people that were protesting didn’t have even the elementary knowledge of Citizenship (Amendment) Act 2019, CAA but were protesting vehemently just on the provocation of leaders from different political parties.

Protesting is the democratic right of the people of India. nobody can stop us from doing so. However, it must be controlled. Keeping our emotions in control is the most significant part. – Shahi Imam of Jama Masjid. Syed Ahmed Bukhari has rightly called on the people of the country to exercise restraint and keep their emotions in check while demonstrating. Even people who are protesting against CAA have the right to protest peacefully but not the right to cause the state to ransom! He also very rightly urged the people, including the youth, to not be provoked by nefarious elements.

It’s sure that the Citizenship (Amendment) Act 2019 seeks to primarily amend the definition of an illegal immigrant for Hindu, Sikh, Parsi, Buddhist and Christian immigrants from Pakistan, Afghanistan, and Bangladesh, who have lived in India without documentation. It must be understood that the CAA grants citizenship to non-Muslims of Pakistan, Afghanistan, and Bangladesh who fled religious persecution and arrived in India before New Year’s Eve, 2014. They’ll be granted Indian citizenship in six years at a very fast pace. Up to now 12 years of residence has been the standard eligibility requirement for naturalization.

It must be borne in mind that within the aftermath of most unfortunate partition on the “most stupid” and “most senseless” ground of religion as insisted by Muslim League and Mohammad Ali Jinnah and also the horrifying communal riots that followed, Prime Minister Nehru of India and Prime Minister Liaquat Ali Khan of Pakistan signed a treaty, also called as the Delhi Agreement, on security and rights of minorities in their respective countries. India had constitutional guarantees for rights of minorities and Pakistan had the same provision in the Objectives Resolution adopted by its Constituent Assembly.

Amit Shah claims strongly that India has kept its end of the bargain while Pakistan openly mocked at it by ensuring that Hindus and Sikhs are either killed or harassed or forcibly converted! to mention the smallest amount, it’s this wrong that the new law seeks to correct. We all know fully well how Hindus, Sikhs among others are forcefully converted in Pakistan, their temples and gurudwaras plundered and vandalized and this alone explains why their population stands hugely decimated!

Can anyone deny this? Why US, UN, UK and other European countries who keep lecturing India on human rights and secularism among other things never said anything on this nor ever took any step to make sure that no terror training camps are established in Pakistan for being employed to kill Hindus and other minorities?

What’s worse is that the USA directly funded terror groups as was acknowledged recently by Pakistan PM Imran Khan admitting that 40,000 terrorists are active and earlier even by former Pakistani Army Chief and President â€“ Gen Pervez Musharraf who said that it was only after the attack on new york on World Trade Centre that the US turned against us!

The first view of the protest is the formalistic understanding of the rule of law. Dozens of petitions challenging the constitutionality of the Citizenship (Amendment) Act (CAA) are filed in the Supreme Court (SC). Critics will probably have their day in court challenging the CAA, which the Apex Court will adjudicate upon. Critics should have faith within the judicial process, and leave it to the court to perform its role of interpreting the Constitution.

The second way of seeing the protests is to try and do so empathetically, On the basis of a meaningful understanding of the rule of law. as per this approach, the protests and constitutional litigation don’t seem to be mutually exclusive but lie on the parallel tracks. A State that thinks of the protests during this way would address them with a light touch instead of an iron hammer, even though those protests get out of hand from time to time.

This is what I find most hurting that some parties are attempting to fish in troubled waters and make huge political capital from it without caring a damn for the disastrous consequence it might have on the unity and integrity of our country! there’s a strong principled reason to adopt the second approach in preference to the primary one. Interpreting the Constitution isn’t within the authority of the courts alone. The people must, at a minimum, remain prominent players within the process of constitutional interpretation. They must be ready to determine what the Constitution’s promises that (including “equality before the law” and “the equal protection of the laws”) mean for them and whether those promises have transformed into practice.

Aside from this principled reason, there are significant prudential reasons for the protests to continue on the sidelines, because the constitutional litigation progresses.

First, it’s always receptive to the govt. to amend the law while litigation is ongoing, so long as its amendments don’t exacerbate the very reason that the law has been challenged. As per this instance, as an example, nothing is preventing the establishment from pursuing amendments that stretch the scope of the CAA to all the persecuted minorities of Afghanistan, Bangladesh, and Pakistan — not just non-Muslim minorities. Alternatively, it might also be open for it to increase the scope of the CAA to religious minorities of all neighbouring countries, not just neighbouring countries were Islam is the most dominant religion.

Second, the Supreme Court’s historical account concerning legislation that has challenged for violating fundamental rights is patchy, especially when the problems involved include foreign affairs, national security, and also the exercise of sovereign power. The constitutional challenge to the CAA is at the confluence of all three (or at the least, is probably going to be framed during this way by those defending the law). Examples abound, but there is a need to not look beyond those instances where the most-draconian national security legislation, including the Terrorist and Disruptive Activities (Prevention) Act (TADA), Armed Forces (Special Powers) Act and Prevention of Terrorism Act, has been emphatically upheld by the court.

The establishment narrative may be hard to dislodge. As in the early paragraphs of its judgment upholding TADA, the Supreme Court observed: “Every country has now felt the necessity to strengthen vigilance against the spurt within the illegal and criminal activities of the militants and terrorists in order that the danger to its sovereignty is averted and therefore the community is protected”. Replace “militants and terrorists” with “immigrants”, and the new narrative is in situ.

Third, even in those instances where the Apex Court does make a strong decision, legislative change is usually more practical and easier to implement on the ground. this may be due to government action (formal compliance with the Supreme Court’s decision while sidestepping it in spirit) or inaction (failing to make sure that the lofty principles within the court’s decision percolate to those accountable for implementing it).

The petitioners in the Salwa Judum case, Mr. Ramachandra Guha, who was among those petitioners. (They was also detained for participating in protests against the Citizenship (Amendment) Act (CAA) in Bengaluru). He must know this well that A cat-and-mouse game followed the Supreme Court’s decision, during which the Salwa Judum assumed various avatars over the years. Persuade Parliament to alter its view, and people have addressed this piece of the implementation puzzle.

If the Citizenship (Amendment) Act (CAA) is unconstitutional, there’s no need, for the people or for the establishment, to wait for the Apex Court to decide them that what to do.