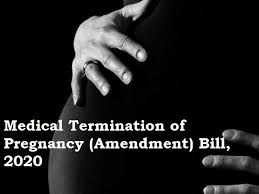 It is to extend the upper limit for permitting abortions from the present 20 weeks to 24 weeks i.e. for “special categories of Women” that include rape survivors, victims of incest, differently-abled and minors, etc.

The bill was introduced by Health Minister Harsh Vardhan, said, “The Bill is the first step towards the safety of women. We have had extensive consultation with several stakeholders.” There was also a group of ministers and the bill was discussed in great detail further proclaimed that this was very progressive legislation since several petitions were filed for the same amendment to be made. 26 petitions in the Supreme Court and over 100 in High Courts were filed.

Read More: How to Register Consumer Complaint Online In India

1. Upper Gestation limit increased from 20 to 24 years for special categories of Women. (Special women are defined in amended Medical Termination of Pregnancy rules and ‘vulnerable Women including survivors of Rape, a victim of incest, differently-abled women and minors.)

2. If on the basis of the aforementioned reasons, the pregnancy has to be terminated in:

3. Name and other particulars of a Woman whose pregnancy has to be terminated shall not be revealed except to a person authorized in any law in force.

4. Any abnormalities are to be diagnosed by Medical Board Comprising of a Gynecologist, a pediatrician, a radiologist or sonologist, and other members as may be specified by the state government.

Views of Member of Lok Sabha:-

Members in Lok Sabha have both Critical and supportive views on the Medical Termination of Pregnancy (Amendment) Bill.
Critical Views:- The Bill should be amended to ensure that it’s provisions are not misused to commit female foeticide.
The Bill should take within its purview not only pregnant women but the transgender community as well.
Aside from these suggestions, the bill got support from the majority of members.

Reasons annexed with the MTP Bill, 2020 and the Statement of Objects states:-

“With the passage of time and advancement of Medical Technology for safe abortion, there is a scope for increasing upper gestational limit for terminating pregnancies especially for vulnerable women and for pregnancies with substantial foetal abnormalities detected late in pregnancy. Further, there is also a need for increasing access of women to legal and save abortion service in order to reduce maternal mortality and morbidity caused by unsafe abortion and its complications“.