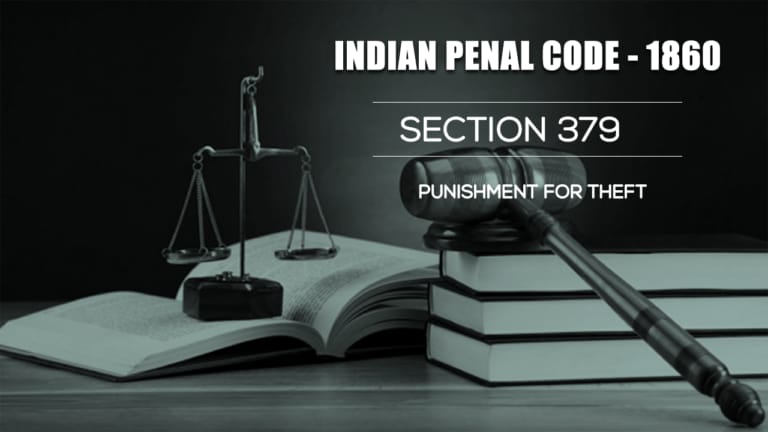 The offence of Theft is defined under Section 378 of the Indian Penal Code, 1860.
An individual is guilty for offence of theft when he with dishonest intention, displaces or took any movable property away from the possession of any other person. That also without that persons’ consent.

Let’s first understand the correct meaning of some words used in above definition:

# Movable Property: Any such property or thing which is not attached to the Earth. In the longer run, one must be able to move it away from the earth.
– It is to be noted that any Immovable property can’t be a subject matter of theft. Because it is called ‘Possession’. —Taking away of immovable property.
Either moving of property or removing an obstacle, both amounts to theft.

For Example- 1. A cuts down a tree on Z’s ground, with the intention of dishonestly taking the tree out of Z’s possession without Z’s consent. Here, as soon as A has severed the tree in order to such taking, he has committed theft.
2. A, being Z’s servant, and entrusted by Z with the care of Z’s plate, dishonestly runs away with the plate, without Z’s consent. A has committed theft.
3. A finds a ring belonging to Z on a table in the house which Z occupies. Here the ring is in Z’s possession, and if A dishonestly removes it, A commits theft.

Essentials for the offense of Theft:-

Taking away with ‘Dishonest Intention‘ is the essence of this section. It is necessary to make a wrongful gain or wrongful loss. As defined under Section 23 I.P.C.,1860.

Case Law:- Pyarelal Bhargava Vs. State of Rajasthan
In this case, the Apex court held that displacing an office file for the purpose of removing some documents from it. Moreover, replacing them with others. It also amounts to theft. Legal Maxim used:- ‘Animo Furandi’: ‘Intention to Steal’.
Example:- Taking away a cow by force in order to fulfill the old debt, is considered as wrongful gain. Because one is not legally entitled to that cow to recover his debt. Therefore, it is called theft.

This term is defined under section 22 of the Indian Penal Code, 1860. For the charge under Section 378, a property must be movable in nature.

Another essential point is to take that property out of the possession of the person. So, one should take away the property.
Exception:- According to the provision Under Section 511 I.P.C.,1860. Removal of Obstacle as stated above. Attempt to commit theft is punishable under this section. Also, the dwelling of the house in order to commit theft is regarded as theft under Section

For Example:- A makes an attempt to steal some jewels by breaking open a box. He finds after so opening the box, that there is no jewel in it. He has done an act towards the commission of theft and therefore is guilty under section 511 I.P.C.

#4. Moving with the Property:-

When there is dishonest & malafide intention moved out with the property of others. The offence of theft will commit when a guest moves out with bedsheets. At the time he moved out of the house, he will be charged under this offence.

# Even a person can commit theft of his own property as well. As in the case of Mehra Vs. St. of Rajasthan. The Supreme court held that moving out with dishonest intention is necessary for theft.

Example:- A pledges his goods with B, subsequently he takes them without consent of the B, dishonestly. A is guilty of theft of his own property.

Punishment: For a term which may extend to 3 years Or Fine Or With both.