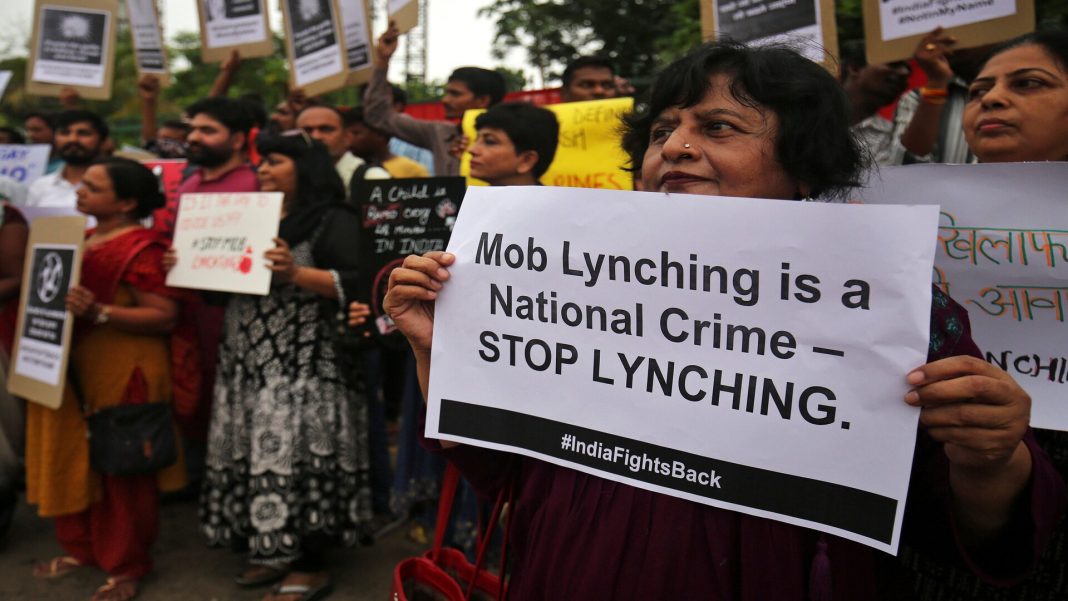 Lynching is also known as vigilante violence refers to the hate-inspired violence against minorities. This is an extra-judicial punishment to punish a person alleged to commit a crime. Merriam Webster dictionary describes Mob lynching as, ‘putting to death by mob action without legal approval’. It is also defined as lynching, ‘as putting the death of a person through mob action, without the resource of the law.’ “It is an unlawful murder by an angry mob of the people.”
In India, such violence is mostly inflicted upon Muslims accused of bovine related matters.

Or for any other reason like love, Jihad, Dalits, interfaith couples. Majorly on the mentally challenged woman, who is alleged for stealing or murdering children (Dayan).
In order to provide instant justice or to safeguard their traditions and social norms. In India, the cow has been given the status of a sacred animal and is worshipped at various places. To kill her is considered a sin. Most of the states have enacted laws to prohibit the slaughter of cows.

Presently there is no special provision or law to punish mob-lynching or hate violence in India. But there are some other provisions related to such violence. The Code of Criminal Procedure (Cr.P.C.), 1973, under section 223 (a). It provides that the mob involved in the same offense in the same act can be tried together. The Indian Penal Code (I.P.C.), 1860; has also same proximate sections related to hate speech and hate crimes under section 153 A. Promoting and enmity between different groups on grounds of religion, race, place of birth, residence, language, etc. And doing acts Pre- Judicial for maintaining harmony. Section153 B talks about imputation assertions, Prejudicial to national integration. Also, another section named 505 states that statement conducting to public mischief. But as seen in the majority of cases in India.

These sections weren’t imposed upon the perpetrators and the only section against individuals such as Section 302, punishment for Murder. Attempting murder under Section 307 of the penal code. Section 323 defines punishment for causing hurt along with section 325 for causing grievous hurt, etc. They are applied because of which the crime is seen as an offense against individuals and not against the community. Such an approach is not justified. As an incident like mob lynching is seen from communal lenses. They are usually targeted against a certain minority caste, religion, gender, etc. It is a matter of public order and not merely an offense against a person.
The offense of lynching usually takes place as an organized hate crime against a community. So it must be considered as a heinous offense

The reason behind the commission of an act of mob violence cannot be attributed to only one factor. As many factors can contribute to such violence. The most common reason is technology. In the last one year, 28 people across 9 different Indian states have been lynched in separate incidents. These have been triggered by rumors spread on social media.

The following are some of the major causes of mob violence.

The supreme court held that condemned mob lynching incidents across the country. The Apex Court urged Parliament to enact a law to deal with crime. That threatens the rule of law and the country’s social fabric.
Here’s a slew of directions including preventive, remedial and punitive steps given by the Court to deal with the crime.

Need to research on the topic

Out of 60 reported attacks over Eight years, 58 that is 96.7% occurred, as we said. After the Modi Government came into power in 2014. Since then the frequency of these attacks has escalated sharply. Such acts of people taking the law into their hands believing to be correct normally and political poses a great threat to the rule of law. The people of minority groups in the country and steps to be taken to check and deter such violence. The violence is caused by the Vigilante who has some of the other political connections with right-wing parties. Such believes themselves to be politically correct and safe while punishing anyone. They believed to have committed any offense.

Mob violence may happen because of various reasons like witch-hunting. Because of which more than 2000 mentally challenged women were lynched. For rumors that alleged them of stealing and murdering children. Communal conflagrations as in 1984, Anti-Sikh riots or Anti-Muslim riots of Gujarat in 2002.

This Article is by Shubham Hatkar, law student from N.C. Law College Nanded, Maharashtra. This Article contains own views of writer, which has nothing to do with Legal Thirst.