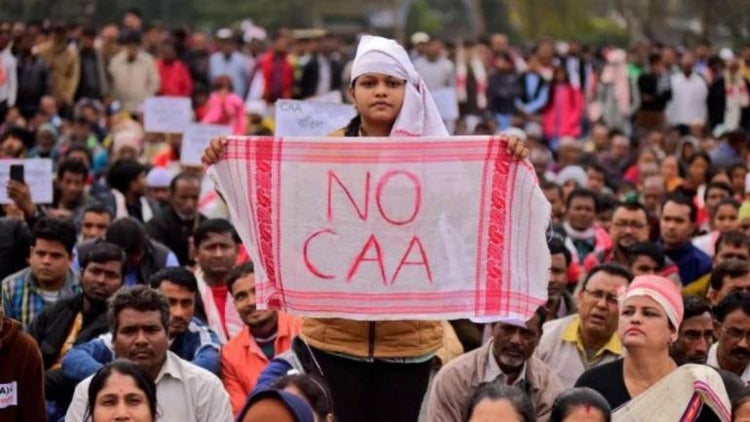 CAA or the Citizenship Amendment Act was one of the hottest topics of the year 2019. It came into being on December 12, 2019, after the President gave his consent to it. The act seeks to amend the definition of illegal immigrants for Hindu, Sikh, Parsi, Buddhist, Jain and Christian communities. Those coming from Pakistan, Afghanistan, and Bangladesh who have lived in India without documentation. They will be granted fast track Indian citizenship in 6 years. The legislation was introduced to protect by granting citizenship to the minority immigrants who were persecuted from Muslim majority countries based on religion. But the format of the act was such which raised many arguments and questions against the intention of the government.

Excluding a religious community specifically, raised serious questions and it was seen as a step of the government to promote the Hindutva ideology of BJP. A significant number of intellectuals, writers, activists, and students came ahead and protected against the bill and the protests nearly took the shape of riots. Attacks on educational institutions were some sad but real events. The protestors put forward an argument that the act was against the very idea of constitution and attacks on the secular identity of the country. With the same argument, many petitions were also filed in the apex court, seeking a stay on the act but these were set aside by the apex court.

The government made an argument that Muslim minorities can seek refuge in Muslim majority countries but it is an inconsistent reply. India was not formed based on religion, Pakistan was. At the time of partition, only the Muslim League and Hindu right-wing were in the support of two nations theory I.e. The formation of two different nations based on religion. The founders of independent India were strongly in support of the idea of secularism and this is what our constitution also suggests. Article 14 gives the right to equality without any discrimination on any basis.

There was an intense outrage against the act in the northeastern parts of the country, especially in the state of Assam. Although a chunk of Northeastern states has been exempted from the legislation, still it covers a significant part of Assam. The protests stem from the fear that illegal Bengali Hindu migrants from Bangladesh if allowed in the country, will pose a threat to the cultural and linguistic identities of the state.

Another aspect that adds up to the fear of the CAA (Citizenship Amendment Act) is the NRC-National Register of Citizens. The process took place in Assam, every person was to prove that either he or his ancestors were in Assam on or before March 24, 1971. Even after this process, it is not clear how many illegal immigrants were identified and many bonafide citizens were left out of the process of NRC. Also, the whole exercise was very expensive. And the decision of expanding it to the whole country can be a drastic step for the economy. The home minister clarified that this process will again take place in Assam along with the other parts of the country.

This is the combination of CAA (Citizenship Amendment Act) and NRC which is a reason for fear amongst Indian Muslims. We have seen in the example of Assam. That a minor mistake in the name of a person can cause great problems. And in a country like India, about 20% of people who are poor and illiterate cannot present their documents to clarify that they are legal citizens of India. And according to the government documents like Aadhar card or ration card are not sufficient to prove citizenship!

The idea may be brought with a bonafide intention to protect the immigrant minorities. But the specific exclusion of a particular religion or a community puts a question mark on the intention of the government. As of right from its starting, the BJP has been a strong supporter of the concept of Hindutva and many leaders of the party have also given such statements. There should not be discrimination on the basis of religion or community. Moreover, a country like India which is facing chronic unemployment, poverty and lack of basic amenities. We need to focus on the solution to these problems rather than adding up to the problems by inviting more people to live in the country.

This Article is written by 2nd-year B.A.L.L.B. student, Janhvi Kaushik enrolled in Law department Maharishi Dayanand University, Rohtak. This Article contains personal views of the Writer and nothing to do with Legal Thirst.

Read More such Articles from our Budding Lawyers: Mob-Lynching in India : A Serious Problem