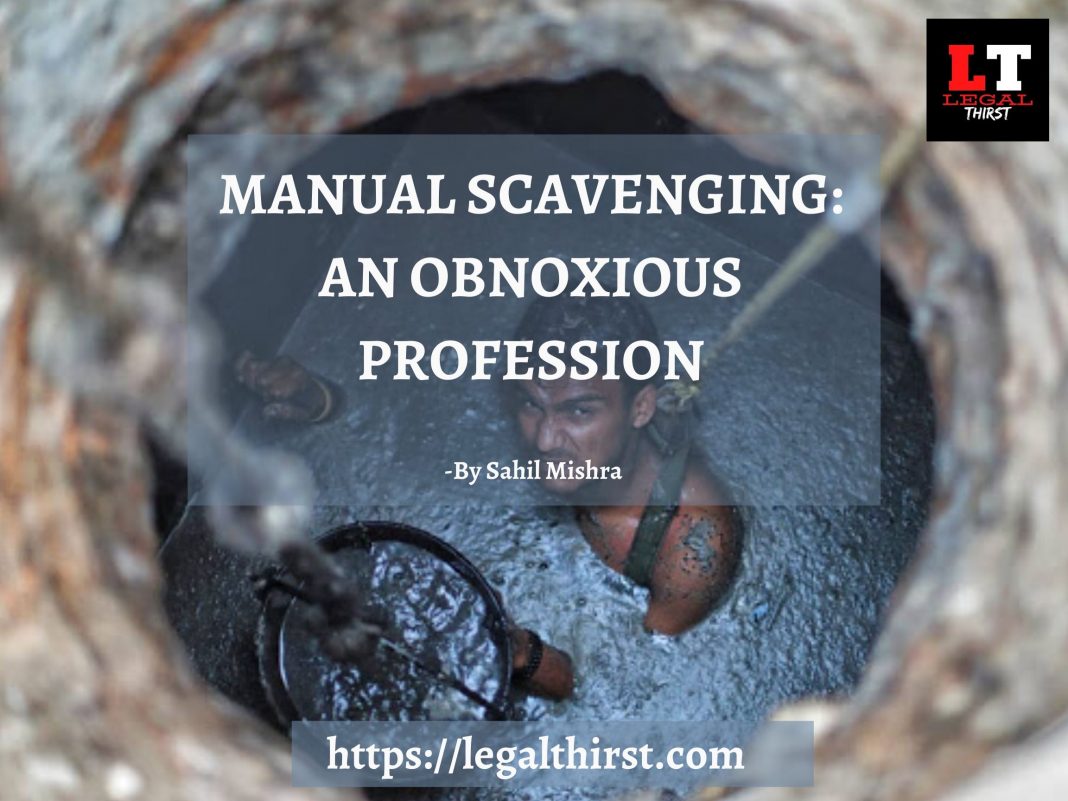 India has always been appreciated by the world for its diversity. Especially known for the various religions, cultures, traditions, and customs that it follows. However, the bitter and mournful reality is the rigidity of caste-based functioning in the nation. The caste-based occupation system which was started with the arrival of Aryans in India around 1500 BC, has forced the lower caste to work as manual scavengers till today. Thousands of death caused due to suffocation and breathing problems arising out of toxic gases. Many have been recorded but no serious action has been taken yet.

This elucidation will reflect upon the statutes which were made by the legislation of the country to criminalize the employment of people as manual scavengers but were never implemented with spirit in order to prevent such inhuman activity.

Further, this paper by Sahil Mishra (Legal Researcher & Content Writer at Legal Thirst); will discuss the view of the judiciary and different international and national organizations on manual scavenging, particularly in the Indian context.

Manual scavengers are defined as “persons engaged in or employed for carrying human excreta” under “the employment of manual scavengers and construction of dry latrines (prohibition) act 1993”. In simple words, people who are engaged in cleaning dry Latrines, sewers, or pits with hand tools like shovels and tin plates without any personal protective equipment are manual scavengers. Such a degrading task to clean sewers is done by those who belong to the lowest caste in India; which are named differently in different states like bhangi, Chamar, and choode.

This practice is discriminatory in nature, people belonging to these castes and who are engaged in it professionally are isolated from the rest of the society and are treated as untouchables. According to a report of National Round Table Discussion on Social Inclusion of Manual Scavengers 2012, out of the total percentage of people working as manual scavengers, 95% are women. The Socio-Economic and Caste Census, 2011 stated that approximately 1,82,505 people are working as manual scavengers in rural areas only. However, the figure is still ambiguous as it may not be an exact figure because the census only mentioned the people who have registered themselves as manual scavengers under section 14 of “The prohibition of employment as manual scavengers and their rehabilitation act, 2013”.

Indians have developed an ideology according to which manual scavengers are deportees who do not deserve to be a part of this world. They are humiliated everywhere they try to earn a dignified livelihood. Children too of these households face harsh language and inhumane treatment such as asking them to clean the washrooms of the school; or are simply not allowed to sit with other students to attend the classes; and are humiliated to the extent that they themselves back off.

A JOB THAT KILLS

Every person has the right to live with dignity irrespective of their caste or creed; and what background they come from. Security in law was given to Dalits several years ago; now is the time to give them nationwide support by changing the perspective regarding these underprivileged people. As this rigidity of the people towards caste-based functioning has made them helpless and left them with no option. But to opt for the most sub-standard profession in the world.

634 deaths since 1993-2018 and 110 deaths in the last year only. It occurs due to the same old orthodox ideologies and beliefs of the society; which acts as a force or push on Dalits to indulge themselves in such activities. The citizens of this country need to understand the concept of dynamism; people need to change their approaches and mindset with time regarding such rigid and deep-rooted systems; which has clouded the general vision of humanity pertaining to what was prevalent centuries ago.

Above is the chart showing the number of deaths, of manual scavengers; caused in the last five years due to the cleaning of sewers or pits because of the suffocation due to smell, toxic gases, skin infections, etc. Last year was the one having the highest record of sewer deaths. Despite having a law that outlawed the manual scavenging in the nation in 1993 itself; but still, such degrading profession exists and people belonging to that class still practices this profession; due non-availability of jobs and unsolicited behavior.

IS MANUAL SCAVENGING LEGAL IN INDIA?

Key highlights of the act;

Key highlights of the act;

Before these enactments of the legislations to curb manual scavenging; “The protection of civil rights act 1955” was enforced in which; section 7 (A) of the act stated that no one can compel any person to do scavenging; sweeping or any other job of similar nature.

Almost two decades have passed since the enforcement of the law but still; the practice of manual scavenging prevails in the country. The judiciary on the other hand has condemned the authorities vested with the duty to implement such schemes; and policies for the furtherance of manual scavengers.

In the case of Safai Karamchari and others. v. Union of India and others; the court said that it has on many occasions asked the union and the state for monitoring; and implementing the laws correctly and ordered the state to collect data and implement the acts. In the recent case of Change India v. Government of Tamil Nadu; the court-ordered to pay 10 lakh to the dependent family members of all the persons; who have died in the process since 1993. The international organizations have criticized India for still practicing such inhumane activities. Leo Heller, United Nations expert has commented that; “India has failed to end manual scavenging; and the number of increasing insanitary latrines have been forcing people to engage in this practice”.

The elucidation has reflected the inability of the Central as well as State governments; as manual scavenging is a stigma on the manifestation of modern India. Despite having legislative enactments and laws on manual scavenging, the government has failed to eradicate such egregious practice or job. The judiciary has several times directed the government to implement the laws with serious spirit but still; the statistics portray an arbitrary figure.

The government must take the cognizance of this undignified profession; and must act according to the laws by implementing them; and rehabilitating the persons or households that have made this profession as a source of livelihood. Also, there is an impeccable need to eradicate, along with manual scavenging, the rigidity of caste-based functioning form the society.

Share
Facebook
Twitter
WhatsApp
Linkedin
Email
Telegram
Previous article
Basis of Divorce in Hindu Law
Next article
Can an F.I.R. be quashed by the Supreme Court under Article 32 of Constitution of India