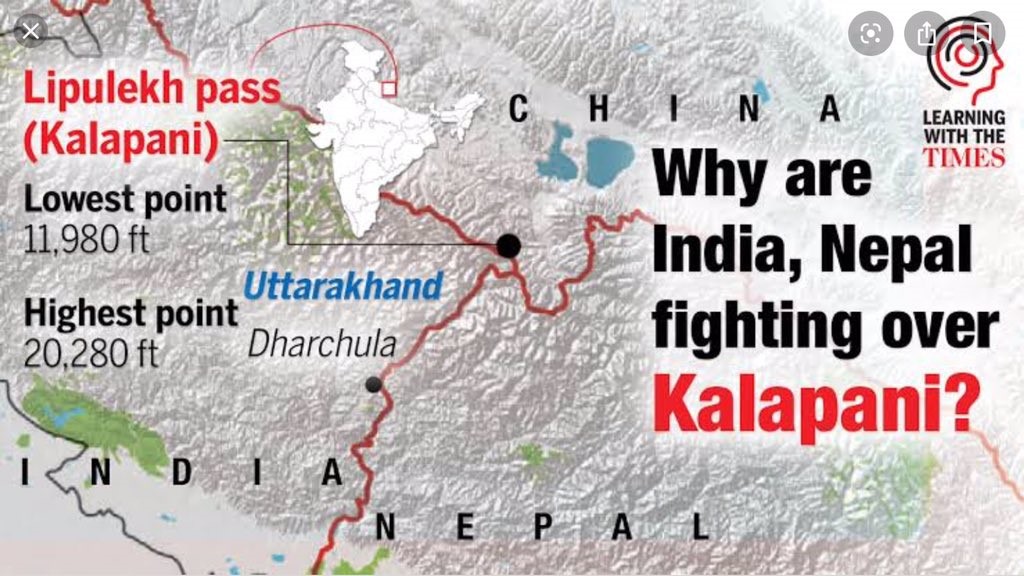 This Article on INDIA’S CROSS-BORDER TERRITORIAL DISPUTES is Written by Sahil Mishra, Legal Researcher, and Content Writer at LegalThirst.com. He is a 2nd year Law Student at Llyod Law College, India. In this article, he tried to summarize the border issues.

Indian territory is facing territorial issues with almost every neighboring country. Although the disputes regarding boundary and borderlines with Bangladesh and Sri-Lanka; have come to cessation there seems no sight of de-escalation of the current situation on borders; adjacent to that of China and Pakistan.

It has been evident from the past wars that India has fought with two of its neighbors; which also holds largest borderline or the Line of Control (LOC) with India; that the approach made by the two nations has always; in a way, challenged and threatened the integrity and sovereignty of India. The un-demarcated boundaries with Myanmar, Bhutan, and specifically with China, Pakistan, and Nepal have turned out into serious tension.

In 1974, India resolved its issue of maritime boundary dispute by addicting the claim on Katchaateevu; an island of 235 acres which is uninhabited yet. 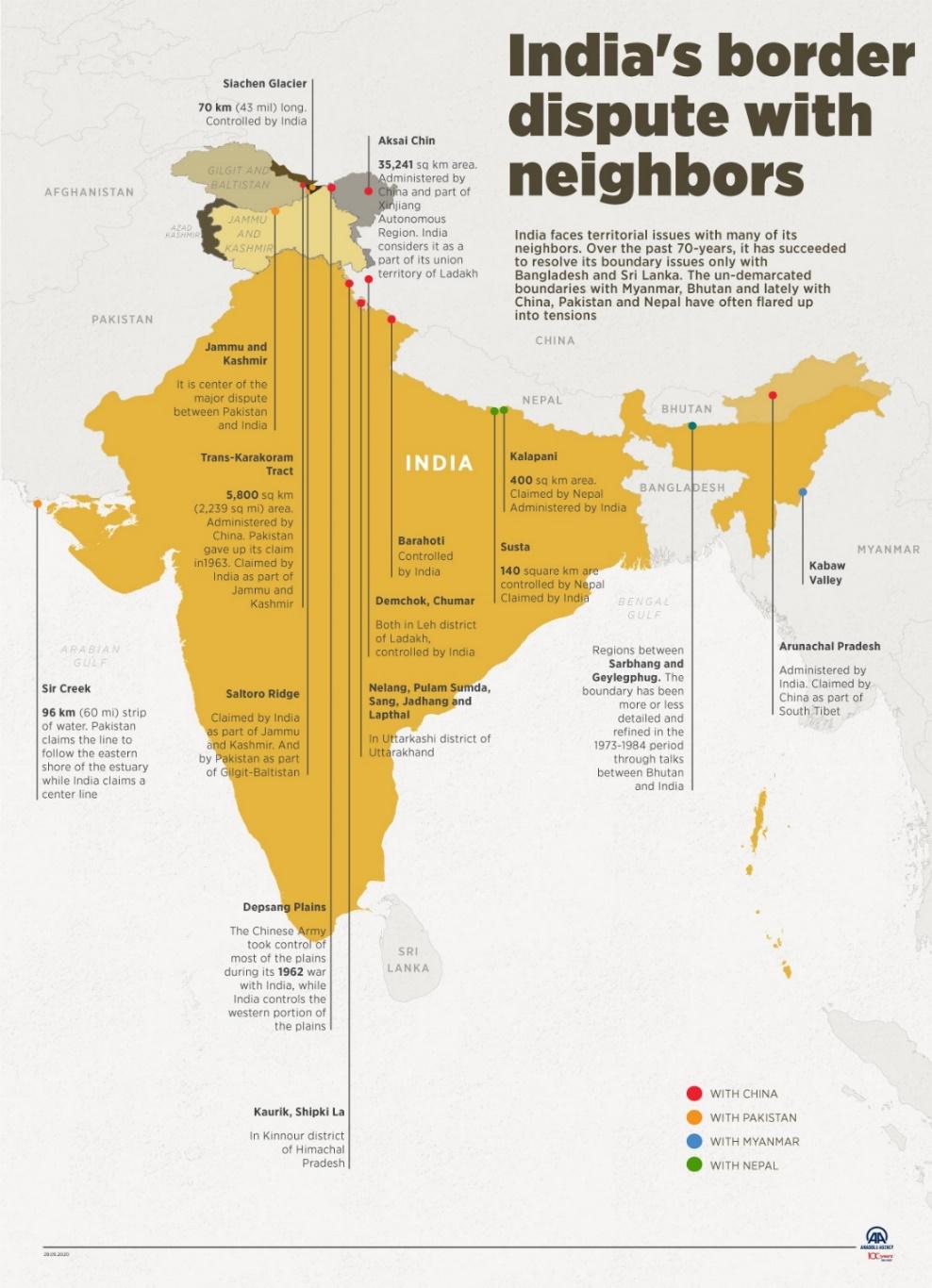 After resolving the issue with Sri-Lanka, India settled the boundary dispute with Bangladesh by resolving maritime; and land boundaries regarding South Talpatti Island and Bangabandhu Island. Both are situated at the offshore of Bay of Bengal, off the coast of the Ganga-Brahmaputra Delta region. Both the nations shared enclaves in 2015 in adverse possession as approx. 111 Indian enclaves were in Bangladesh and 51 Bangladeshi enclaves inside the Indian Territory. This was achieved after long vigorous negotiations, the dispute came to a halt.

However, the situation has never been relaxing as if consider the border tension; between the two most powerful nations in the Asian Continent, India, and China. After the war of 1962 with China; there have been almost 22 rounds of negotiations of special representatives from both the nations; but still, tension needs to be resolved. The same situation is with Pakistan. Every 2-3 days, Indian Territory faces, cross-border firing, violation of International boundaries, terrorist attacks, etc; occur in the Jammu & Kashmir region.

India has seven neighbors, which are China, Nepal, Bangladesh, Pakistan, Bhutan, Myanmar, and Afghanistan. Although, the borderline with Afghanistan ranges around 100km with India; and there have been no circumstances yet which would make India strengthen the borders adjacent to Afghanistan.

There are some disputed territories on the international borders of India; which seriously need attention and require a sudden, bold and strategic action. Some of the disputed land or territories with different neighbors are as follow;

India and China have a total boundary of around 4050 km, which is further divided into three sectors. The states of Jammu & Kashmir, Uttarakhand, Himachal Pradesh, Sikkim and Arunachal Pradesh share their borders with China.

Kalapani; is a valley that is administered by India as a part of the district of Uttarakhand. It is situated on the Kailash Mountain route. “The treaty of Sugauli” signed by the Kingdom of Nepal and British India in 1816; located the Kali River as the boundary with India. Although, it is claimed by Nepal it has been administered and patrolled by India’s Indo-Tibetan Border Police (ITBP). The dispute originated in locating the source of the river which has now become a serious discordance. India reiterated its political map showing the disputed territory fully in control of India without any consent of Nepal. In turn, Nepal has issued a new political map that incorporates 300 km of Lipulekh, Limpiyadhura, and Kalapani; currently with India.

Susta; it is the disputed territory located at Uttar Pradesh and Nepal border. The change of course of Gandak River; led to the dispute as Susta is located at the bank of River Gandak. The area is controlled by Nepal.

Jammu and Kashmir, POK; Pakistan has illegally and forcefully has occupied approx. 78,000 sq. km of Indian Territory in J&K. Furthermore, under the Sino-Pakistan Boundary Agreement that occurred in 1963; Pakistan ceded 5180 km in POK to China, which covers the Shaksgam Valley area.

Siachen Glacier; with all major passes and routes, the Siachen Glacier is currently under the control of India; since “Operation Meghdoot”, which was launched by the Indian Army in 1984.

Saltoro Ridge; it is claimed by Pakistan as its territory as a part of Gigit Baltistan. And India claims it as a part of Union Territory Jammu and Kashmir. Indian Army took absolute control of the region in 1984.

Sir Creek; A 96 km long strip of water disputed between India and Pakistan in the Rann of Kutch Marshlands. The dispute arose from the different interpretations made by the two nations of paragraphs 9 & 10; of The Bombay Government Resolution; 1914 between the Government of Sindh and Maharaja Rao of Kutch. Also, the absence of international boundary assist in raising disputes as to the international boundary of Sir Creek; and the International Boundary of Maritime Line (IBML) has not been demarcated.

There has been no serious dispute ever took place between India and Myanmar, however, the area of Kabaw Valley; which is situated at Moreh in Manipur, is claimed by Myanmar as its maritime territory.