SHOULD SEDITION 124A BE SCRAPPED? 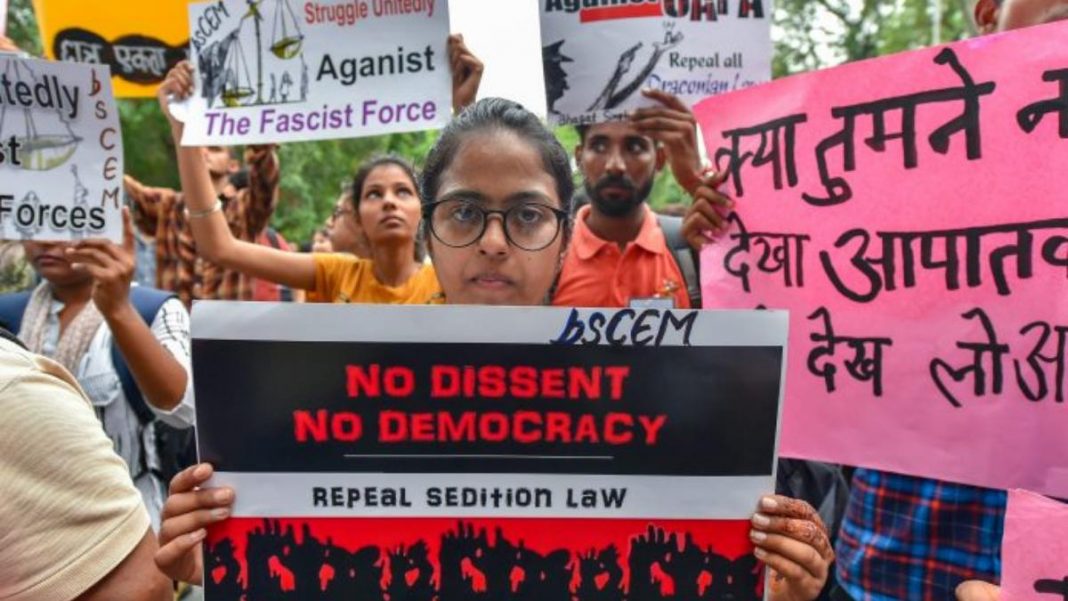 This article on ‘SHOULD SEDITION 124 A BE SCRAPPED?‘ is written by Priyamvada Singh Panwar. She is a Law Student from Mody University of Science and Technology, Rajasthan. The topic ‘Sedition’, that we can say hate speech is discussed in this article.

Section 124A of Indian Penal Code which states that any person; who by word written or oral or by any action or signs or otherwise make any comments or any impression; which brings hate and disaffection towards the government of India should be punished with imprisonment for life; or with three years of imprisonment which may include fine.

After going through this section; the most important question which comes to our mind is the democratic form of government; and the freedom of speech and expression in India; but do people really have this freedom or do we really are in a democratic state?

Let us look a few years back from where the concept of sedition came into existence in India. It was during the time; when India was ruled by the British government and this section was introduced in the Indian Penal Code; there was a movement started against the British government and people were in favor of independent India; that they no more wanted the British rule to continue for which; many a time article was published against the then government; which influenced a large number of Indian citizens to fight for their freedom.

In between all this; the first and the most famous case of sedition came again Bal Gangadhar Tilak; who was thrice charged under sedition; and after his case, many changes were made in the language of sedition; but not just him our great leaders; and father of our nation Mahatma Gandhi was also charged under this section; when his article was published in the weekly.

It is very important for us to have a deep study of this section in the contemporary world; where we have democracy and freedom of speech and expression.

Is this section constitutionally valid?

We need to understand the need for the time it’s been 150 years now to this section; since it was introduced in fact now even the British government abolished this section in their country; so are we suppose to carry it further? With time this section will only be misused as even teenagers are been dragged under it; for their expression of thoughts against the government; recently a 19-year-old girl in Bengaluru was charged for saying Pakistan zindabad in a public forum; whereas 1955 supreme court made it very clear that mere slogan does not amount to sedition.

It is very clear that now a day this section is been used for political gains; as no government wants people or opposition to raising their voice against the government. Mostly the writers, authors, students, and scholars are been charged; as they have a better understanding of the world and courage to speak against wrong; and take a stand, but because of such provisions present in our law; their freedom to express is being curtailed and no better opportunities are being provided.

Misuse of Law in CAA Protest

Recently the government introduced a bill in parliament called the citizenship amendment bill; which was of great controversy in our country; and so a large number of protecting took place around different parts of the country; even at the International level, this bill was talked about. One of the students who participated in the protest was charged under sedition. But more shocking was when few others who tried to take a stand for that student; and took his name during the protest around 50 more sedition cases were filed for them as well; and not just this in the whole situation around 190 sedition cases where filed.

There is a very important point to highlight that all these cases which are filled for sedition basically never convicted; which means that the government is not really interested in conviction or punishment of the person charged; so why these cases are filled? Well, the only outcome is to use this section; as a tool in the hands of local police or local authorities; so that they can dominant the society and keep the public under control or stop certain acts.

A Law misused against Democracy

As we say that the democratic power of India comes from people; “by the people, for the people, to the people” in fact, the biggest source of our country; that is constitution is also an outcome of people’s efforts. Its powers are derived from people like mentioned “we the people……” so don’t you think any law which creates problems for people should be no longer followed?

Though it is very important that; there should be peace among the citizens of the country for better development of the nation; this peace should not be on the cost of their rights. People are the once who elect government officials as their representatives; so they have all the powers to go against the government if there is any law made; or any action which harms the sentiment of citizens in which even government should have no right to stop.

Political Negative Use of Sedition Law

Basically government now a day do not want to face any criticism; as it will affect their powers and they may lose elections in future; and so to protect themselves they enforce the law against citizens; and stop them by taking advantage of certain provisions one of which includes; Sedition section 124A of Indian Penal Code.

But it’s for them to review the judgment given in Kedar Nath Singh vs State of Bihar, 1962; where constitutional bench made it very clear by adding a vital caveat: that a person could be prosecuted for sedition only if his acts caused; “incitement to violence or intention or tendency to create public disorder or cause disturbance of public peace”.
But this judgment is no more followed and any single person is charged for sedition even; if they try to express their better ideas for better governance; and taking criticism is no more tolerated by the people with authority; as they have a great fear of losing power.

In the year 1922 when Gandhi was charged under sedition; he said that section 124A is the prince among the political sections of the Indian Penal Code. This section in democracy with freedom of speech and expression will suppress the liberty of people; as you cannot force anyone to get the affection for anything; if one does not have affection than that people have full right to express his disaffection for the same; until it’s not in a form of violence.

Now that ever expression of disaffection is being charged for sedition; it’s time that a revision of old laws should be made so that certain changes can be done; otherwise the democracy will no more prevail in our country; and the freedom of speech and expression will be abolished as there will be no power to question.

Freedom Of Press in India: Role in Democracy
COVID-19: What is Section 144 of the Cr.P.C?
Do liability arises even upon thinking or planning something criminal?