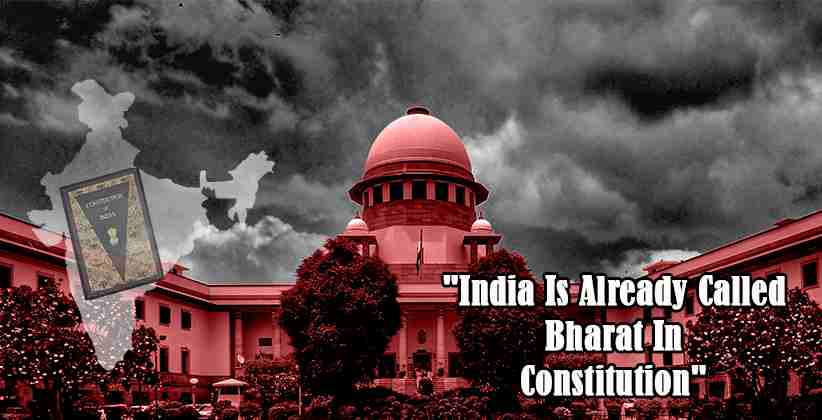 On 2nd June 2020; Supreme Court dismisses the plea in the COVID-19 era, for changing the country’s name from India to Bharat. However, in this case, SC directed the appropriate Ministry to treat the writ petition as a representation.
A bench headed by CJI SA Bobde observed that the Court cannot pass any directions to amend the Constitution for such name change from India to Bharat.

CJI SA Bobde stated “We can’t do that. India is already called Bharat in the Constitution”. As per Article 1 of the Constitution, that says, ‘ Name and territory of the Union:-

it is to be noted, that the litigant, Vaish; argued that every country in the world has one name. The petitioner claimed that such an amendment will “ensure the citizens of this country to get over the colonial past” and the English name India did not represent the culture and tradition of the country; instead, its origin is Greek, and it is derived from the word ‘Indica’.

When the Court expressed reluctance to pass any positive headings, the counsel requested the seat to allow him to make a representation before the appropriate Centre authority for the same matter.

In light of that demand, the Court discarded the request, directing the appropriate Ministry to treat the writ petition as a representation.

The plea said, “The removal of the English name though appears symbolic, will instill a sense of pride in our nationality, especially for the future generations. In fact, the word India being replaced with Bharat would justify the hard-fought freedom achieved by our ancestors.”

The SC had dismissed a comparative plea in 2016.